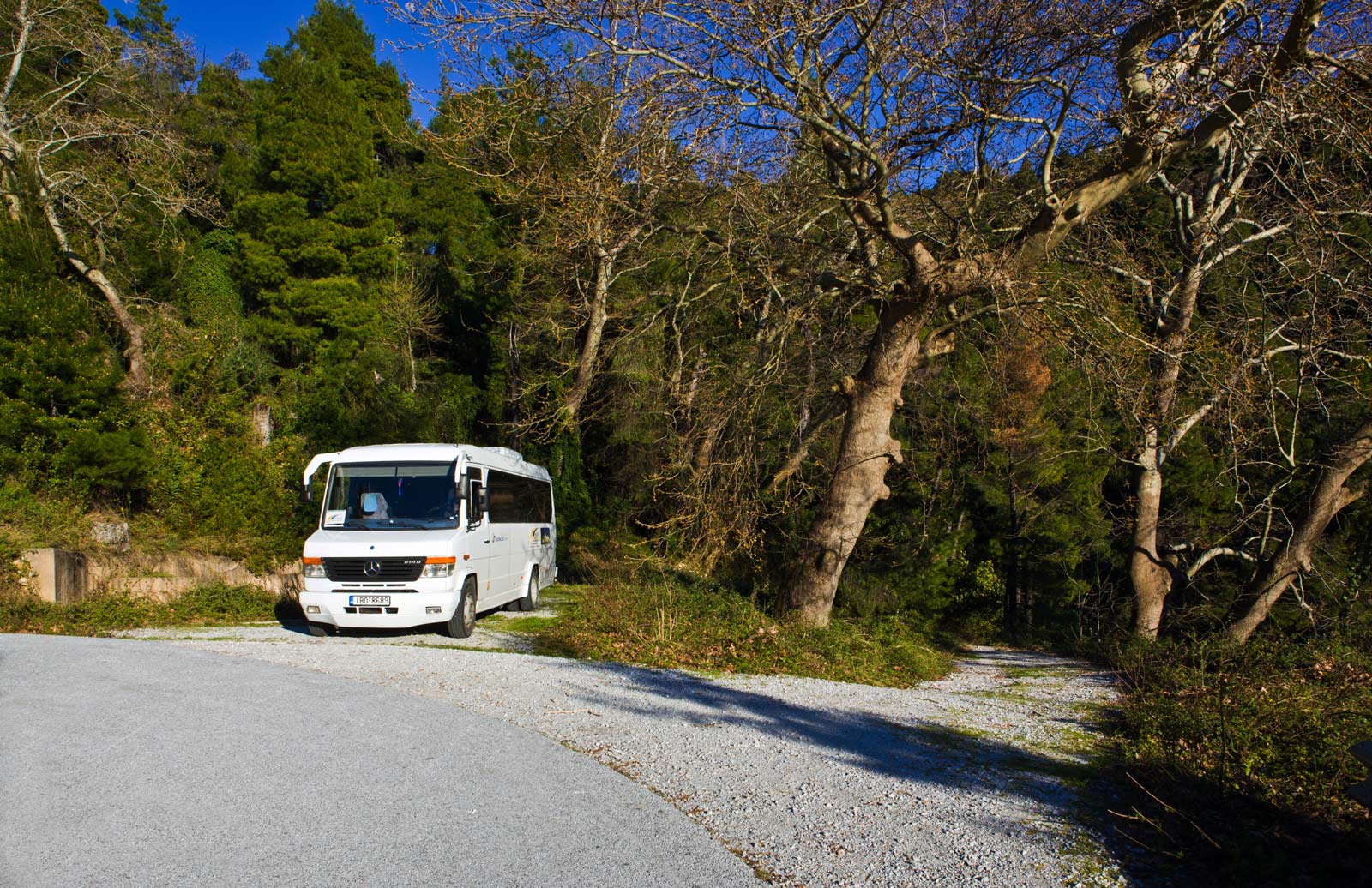 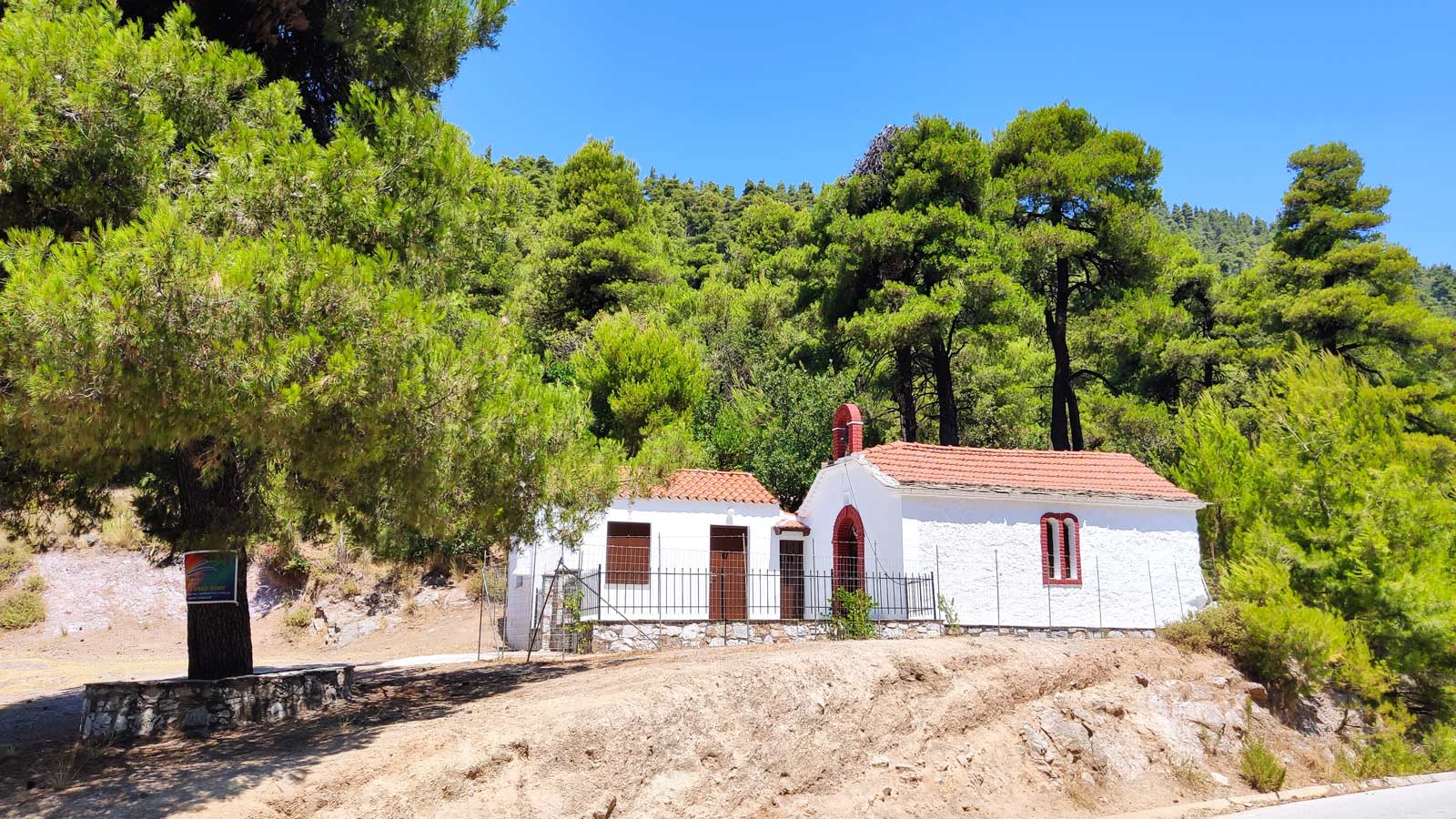 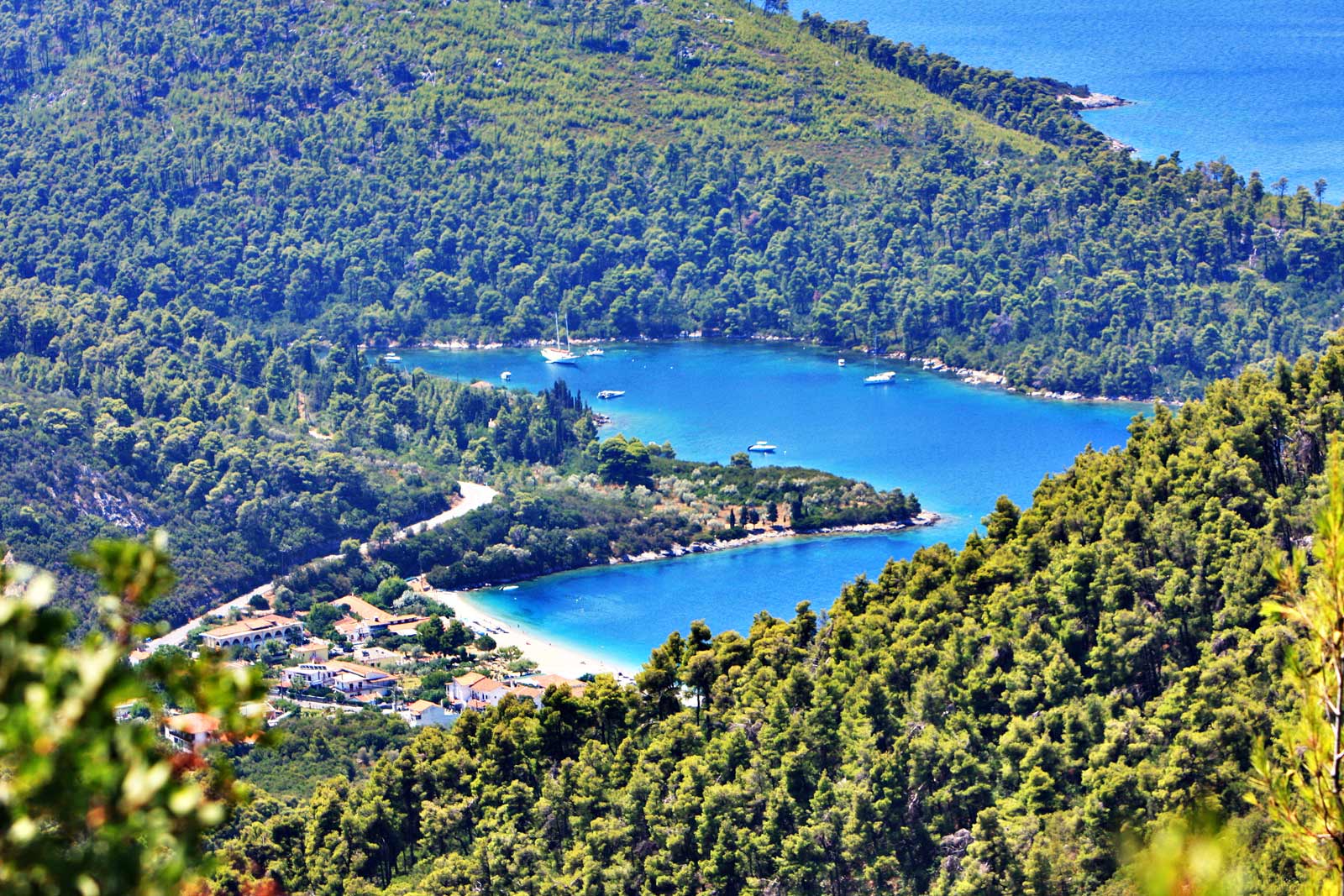 Days: Monday, Wednesday, Friday, Sunday
Our tour starts from the town of Skopelos and final stop, the beach of Hovolo, in the village of Elios. After Hovolo we return to our base.
Agios Riginos Pyrgos 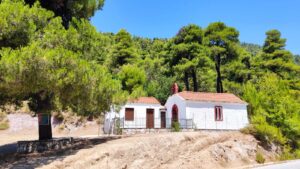 Our First stop will be at the chapel of Saint Riginos in Pyrgos area. This small church dates back to the early Christian years and was renovated in the 20th century. Until then, it functioned as a small monastery, with one monk. Saint Riginos had blessed Skopelos from that point and for this reason this chapel was built here. The largest church – monastery of Saint Reginos, is located close to Skopelos town. It is a beautiful building with frescoes of saints, that’s worth visiting.
The heart of Panormos 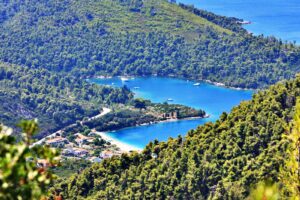 after Saint Riginos church, we will make a short stop for photos in an enchanting and unique landscape, where the bay of Blo in Panormos, forms a heart of pines, rocks and sea
Agios Ioannis Kastri 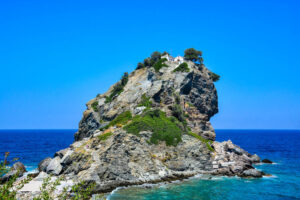 Our next stop will be at Agios Ioannis of Kastri. The now famous from the movie Mama Mia church, of Agios Ioannis is located on top of a rock, in the sea, at a height of about 100 m. To get there you have to climb about 106 steps. The stone-carved staircase is well protected, as the steps are carved into the rock. From the top the view to the Aegean Sea is dazzling.
According to a legend, a fisherman from Glossa, returning one night, from fishing, saw a light at the top of the rock. He watched it every night, until a woman appeared in his sleep and revealed him that there was an image of a saint at the top of the rock. When he finally climbed up there, he found the icon of St. John the Baptist. So, he took the icon, and transferred it elsewhere, but the icon mysteriously returned to its original place, where they finally built the chapel, which celebrates on August 29.
Agioi Taxiarhes, Glossa 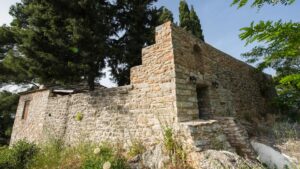 After Agios Ioannis we will visit The Monastery of Agioi Taxiarhes in Glossa, a beautiful attraction for visitors and locals alike. The monastery is built very close to Glossa . Its foundation is probable in 1672, due to a wall inscription at its entrance. Befanis Dimakitzas appears in the inscription as the first owner. In 1770 the monastery became a part of the Mount Athos Monastery of Xiropotamos and until the end of 1800, his contribution to the economic life of Glossa was crucial, as it had a significant real estate property.
In 1911 the Monastery of Xiropotamos, after disputes with the locals, sold all the properties of the Monastery of Taxiarches to them.
The monastery has a stone enclosure, a catholic church in the center of the courtyard (cruciform with a cylindrical dome inside and outside with a drum-floor with large stone slabs-roof of slate), two wings with cells and a stone-built ridge with four sides.
On the west side there are cells with a basement. The cells are located on the ground floor and all have a fireplace. Outside the monastery there is a well that used to supply the water of the monastery. the legend speaks of a secret entrance, of an underground tunnel, which starts from the cells and ends at two exits, one in the area of Rouso in Loutraki and the other in Paliokastro in Glossa. The two cypress trees of the temple, come with the legend of the promise of a woman. This woman gave birth to twin boys during a war and gave them the names of the two archangels, Michael and Gabriel.
The findings in the area of the Monastery indicate the existence of an early Christian, church, with a Byzantine cemetery.
Perivoliou beach for swimming. After the Monastery Agioi Taxiarhes, we continue to Perivoliou beach for swimming. Following the path with the concrete steps you will find yourself on a beautiful beach, with transparent blue waters and impressive rocks that cast their shadow on the shore.
The beach is organized
Hovolo beach Elios 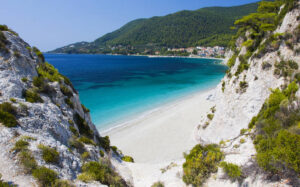 After perivoliou we leave for our final destination, Hovolo beach, which is located 700 m. from the village of Elios, in the western part of the island. its wild beauty is composed of white rocks and pebbles and pines that embrace the coast. It is one of the favorite beaches of the visitors of skopelos, due to its unique beauty. However, it is not organized, so you will have to get the essentials yourself. You reach the main beach on foot, after you pass 2 to 3 coves, as there is no possibility to get there by car. the clear water, the imposing landscape and the wonderful sunset will compensate you and will enchant you.
Relax end enjoy the tour to the magnificent land and seascapes of skopelos.
The buses are fully equipped with air conditioning, special sun protection films, seat belts, fire extinguisher and pharmacy, in case of emergency.
We make a stop at the famous church of St. John in the castle with two hundred steps, where you have the opportunity to visit the Temple and see the view from above, enjoying the places where the famous Hollywood movie “mamamia” was shot.The final destination is the village of Elios, where you will find the award-winning emovo beach stopping for a swim. On your return to the town of Skopelos, you have the opportunity to see the beautiful beaches which are located on the east side of the island.
The tour starts at 09:00 from Skopelos to Agios Ioannis and Perivolios and ends at 16:00.

The route to and from Skopelos lasts one hour where you will have the opportunity to hear the history of the island from our guide, who is willing to help you in any case.
The buses are fully equipped with airconditioning, special sun protection films, seat belts, fire extinguishers and pharmacy, in case of emergency

For reservations and more information please do not hesitate to contact us.